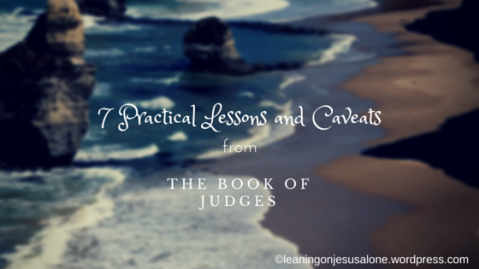 If I were to be asked about my favorite Bible book–one of the last books I would answer is the Book of Judges. That was prior to my in-depth study of this book.

What is the Book of Judges all about anyway? It’s a book filled with stories of how God called and raised up judges for the apple of His eye–Israel.

As I read this narration of Israel’s history in this particular book, I realized how God’s peculiar people lived a cycle of repentance-sinful-living-repentance-type of lifestyle.

Again, I realized, we are no different from them! We have the same sinful human nature as the people of Israel and so reminders are necessary to help us maintain a consistent walk with God.

Now, what did I learn from the book which I thought would be one of the books I like the least in the Bible?

This is a cue for me personally.

Whenever I find myself prioritizing something or someone over my personal study of His Word, then I recognize it/him/her an idol.

Whenever I fail to obey God’s will because of anyone or anything, I consider it or him an idol.

Needless to say, whenever I find myself in that situation, I confess it to the LORD and find His same faithful forgiveness of my sin (1 John 1:9). Praise His name!

Second, God allows us to be enslaved by our enemies and “idols” when He sees unrepentant attitude in us. (Judges 3:12-14)

King Eglon ruled and controlled Israel for eighteen years! It’s all because God was disrespected by their worship of Baal and Ashteroth–two prominent idols of Israel in that period (Joshua 3:7).

If we want to live a victorious life, God is calling us to love and serve Him with all our hearts and forsake idolatry. Here’s a detailed antidote to idolatry.

Third, God gives victory to those who love, trust, and obey Him. (Judges 4-5)

You might be familiar with the story of how Deborah, the only woman judge in Israel, courageously delivered her people from the hands of their enemies. She knew that Barak was supposed to lead them in fighting. Since he was hesitant to do so, Barak forfeited the honor of leading Israel’s victory. Instead, God gave victory to Israel through Deborah’s valorous leadership.

Fourth, peace is the mere fruit of obedience to God’s word. (Judges 5:31)

Here’s a practical application for us: if we want a peaceful nation, we need leaders who will be brave enough to take a righteous stand in leading his people–someone who is not afraid to offend those who are disobeying God’s revealed standards of living.

Let’s pray for God to raise leaders who have such a reverence in Him that they will not be in favor of what God calls detestable.

Fifth, when God calls us to do His will, He gives  us His promise of presence and peace.

“When Gideon saw that he was the angel of the Lord, he said, ‘Alas, O Lord God! For now I have seen the angel of the Lord face to face.’ The Lord said to him, ‘Peace to you, do not fear; you shall not die.’ Then Gideon built an altar there to the Lord and named it The Lord is Peace. To this day it is still in Ophrah of the Abiezrites.” Judges 6:22-24 (NASB)

Sixth, it’s but natural to doubt God’s calling to serve Him but He is more than willing to prove and manifest His omnipotence. Yes, despite our fears and weaknesses! (Judges 6:37-40)

Who is our example in this passage? Yes, it’s Gideon. God encouraged Gideon to trust Him by granting his request to show signs.

Seventh, God sometimes commands us to follow a seemingly awful battle plan so He can get the glory when we obey Him. (Judges 7:7)

Do you remember how Gideon and his 300 men conquered the Midianites–their enemies? Yes, with trumpets and pitchers. Please don’t smirk. That’s how they won simply because they trusted God’s wise battle plan. 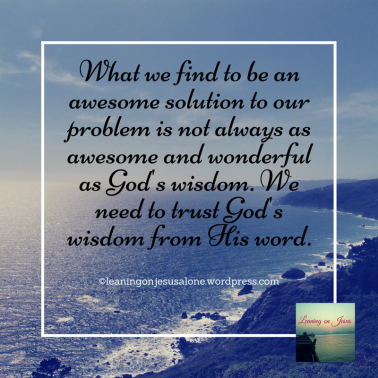 Isn’t it a glorious thing to see victory led by God? We, believers, must fight our battles, not by might or swords but by faith in God’s Word!

There are many other lessons I have learned from the book of Judges but I guess the ones I wrote above are the ones time has permitted me to do so.

What are the lessons that you have been learning from your Bible meditation time? Share them with us. We will love to be blessed and challenged by what God has been teaching you as well.

It’s my prayer that God would continue to glorify His name in our lives as we live for Him, bearing His word in our hearts and mind.

Hi! Welcome to my small space online! I am Nance, the writer of this blog. It is my desire that the God of the Bible will use my writing to influence readers and visitors of this blog to know Him better as I testify of His work in my personal life. All I desire is to bring glory to His name. I am persuaded that I can't do it without leaning on Jesus, my Lord and my Savior. Enjoy your stay!

Be a Better Steward of God’s Money With These Books

Topics I Write About